Welcome to another review – today I’m going to be taking a look at the newly-released portable 7” graphics tablet from XP-PEN, the Deco mini 7W.

Fans of XP-PEN and regular readers of this site may think this tablet looks somewhat familiar… and they’d be right! This is, in fact, a 2.4Ghz ‘wireless’ version of the Deco mini 7 tablet released in 2020 last year (you can read the review of that model here). 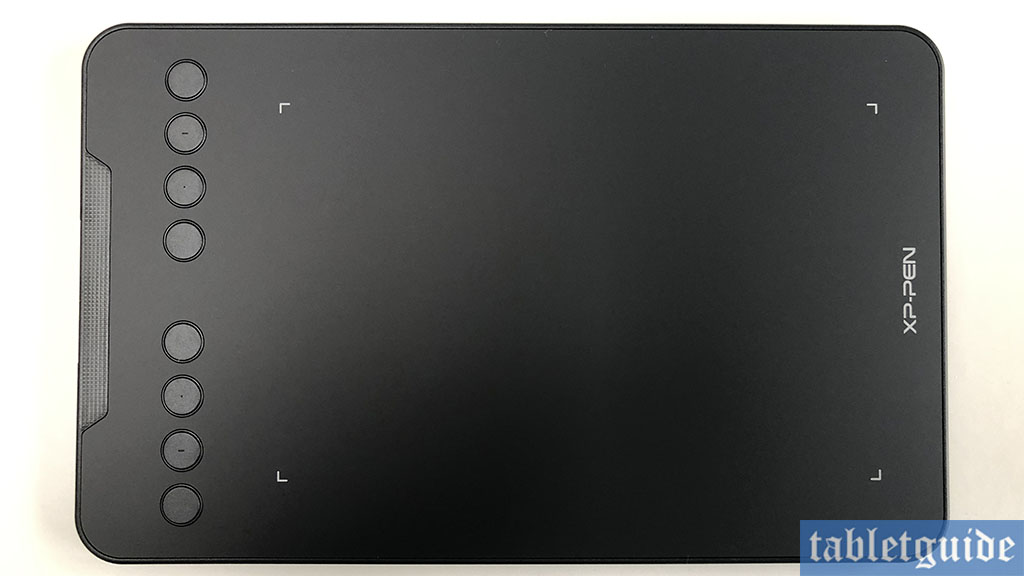 The tablet comes housed in a minimalistically-designed white box with a picture of the tablet taking center stage on the front, with the XP-PEN logo sitting pretty on the bottom left. 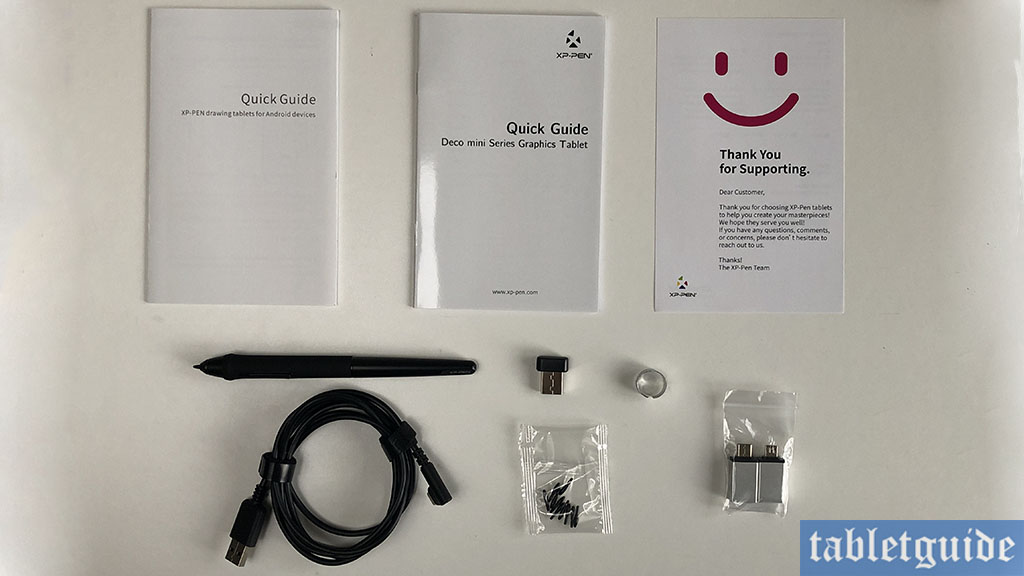 The design quality of this tablet, as usual from XP-PEN, is great and with its rounded edges looks nice too and is the perfect size for transporting from the home to the office and vice-versa. Or, if you’re currently working from home in these strange times, from the kitchen to the front room… 😊

Flip the tablet over and you’ll see the four rubber ‘feet’ which stop the tablet sliding all over the pace once you start drawing. Down the actual left side of the tablet is the USB-C port and ‘power’ button. 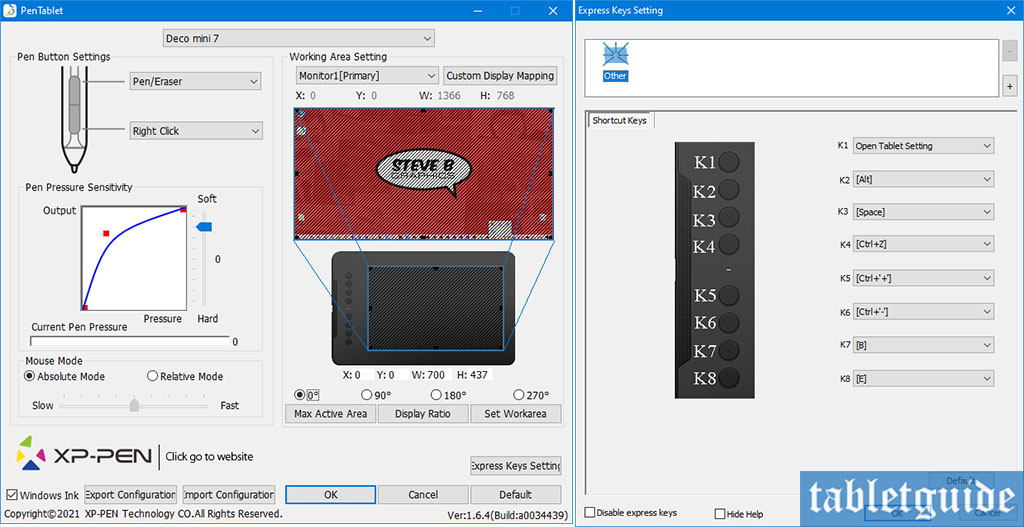 As usual, you need to uninstall any previous software drivers you may have on your system before downloading and installing the drivers for this tablet (which are available from XP-PEN’s website).

Quick overview of the pen: 8192 levels of pressure sensitivity are supported, as is 60° of ‘Tilt’ (perfect for shading!). It’s battery-free so will never require charging and feels nice and light to hold.

It’s a 2-button pen and by default the buttons are, from top to bottom, ‘Pen/Eraser’ mode and ‘Right Click’ – these too can be changed via the driver software. The rubber grip surrounding these feels nice to hold and I can foresee no issues using this for hours on end. (For the technical geeks out there, it a P05D!). 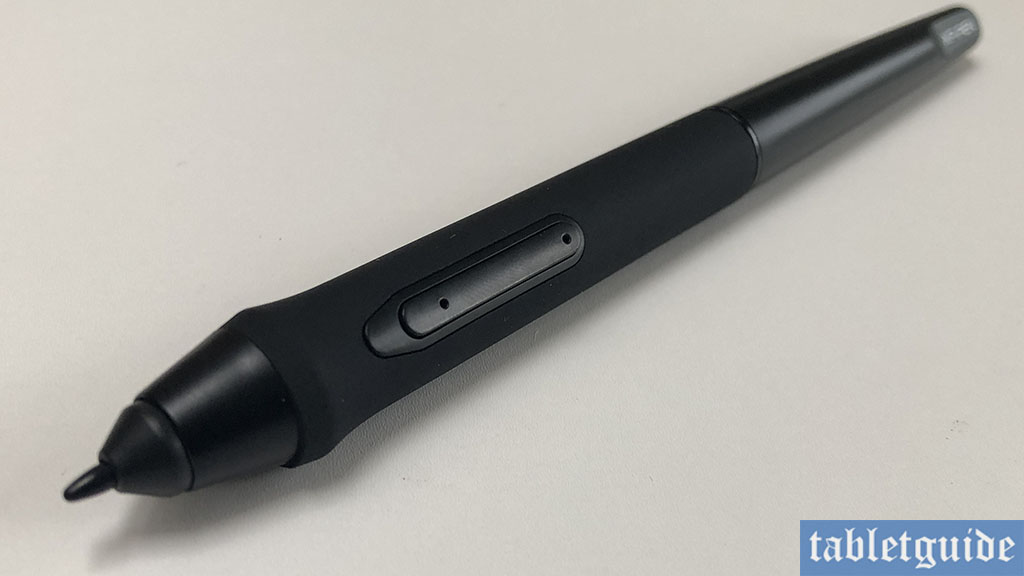 With the drivers installed, it’s testing time! Plugging in the USB-C to USB cable, I was up and running immediately in Photoshop. The drawing experience with this tablet is great – 7” is quite a nice small size to have sitting in front of your laptop. Lines tapered nicely with no lagging and the pen glides across the tablet surface effortlessly. Pressing down harder produced nice thick variant lines – this pressure sensitivity can be changed in the driver software to support the way you work.

The Shortcut Keys worked exactly as expected and I was able to zoom in and out of the Canvas and Undo my scribbles easily when needed. I still personally use my laptop keys and/or shortcuts when creating, but they worked perfectly and have a nice little ‘resistance’ when pressed.

But wait! If you’re happy with all that, you might as well purchase the slightly cheaper Deco mini 7 tablet… but this is the XP-Pen Deco mini 7W… the difference being (not only the letter W 😊) you don’t need to have the cable plugged in the entire time; you have the option of using this tablet ‘wirelessly’!

Swopping out the USB cable (from both the tablet and the laptop) and replacing it with the USB Wireless Receiver enables you to go totally wire free, which feels slightly liberating once you get it going!

I say that because I had a small issue getting it to connect to my laptop – you need to press the power button on the side of the tablet for 3 seconds to connect the devices, but as the button (at least on my tablet) doesn’t actually seem to ‘depress’ I had no way of knowing if it had succeeded. 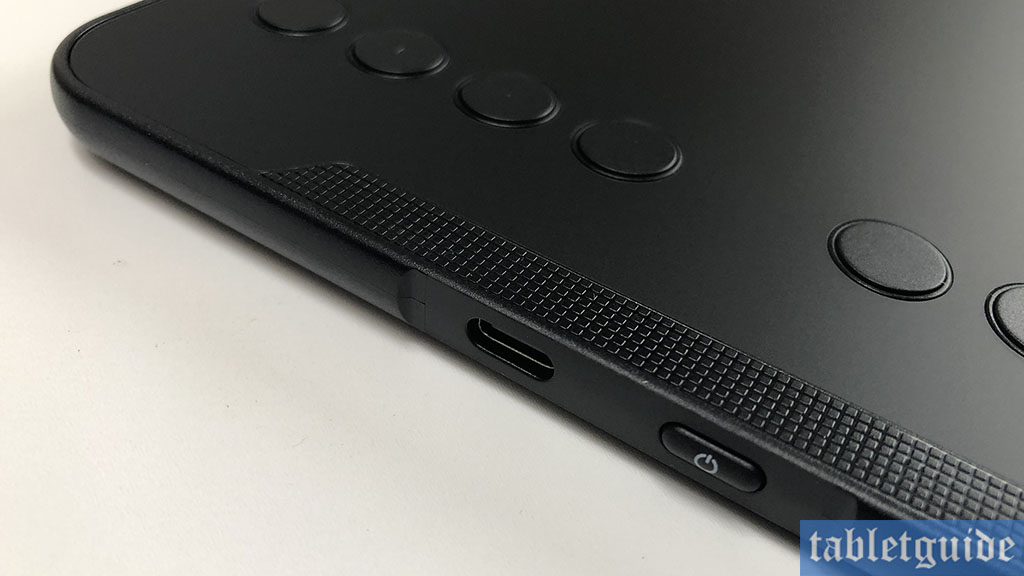 After a few ‘unplugging and plugging it back in again’ sessions, the small blue LED light on my tablet finally started flashing, then stayed on permanently, indicating the connection had been made – hoorah! (pressing the power button for a further 3 seconds turns off the device).

The pen only needs to be 10mm away from the tablet surface to register and this is indicated by a small white LED next to the blue one (these LEDs are positioned conveniently between the shortcut keys, dividing them into two groups of four). A further red LED lights up when the tablets battery power is low (well, actually flashes when under 10%), stays on permanently when the battery is being charged and is ‘Off’ when charging is complete. 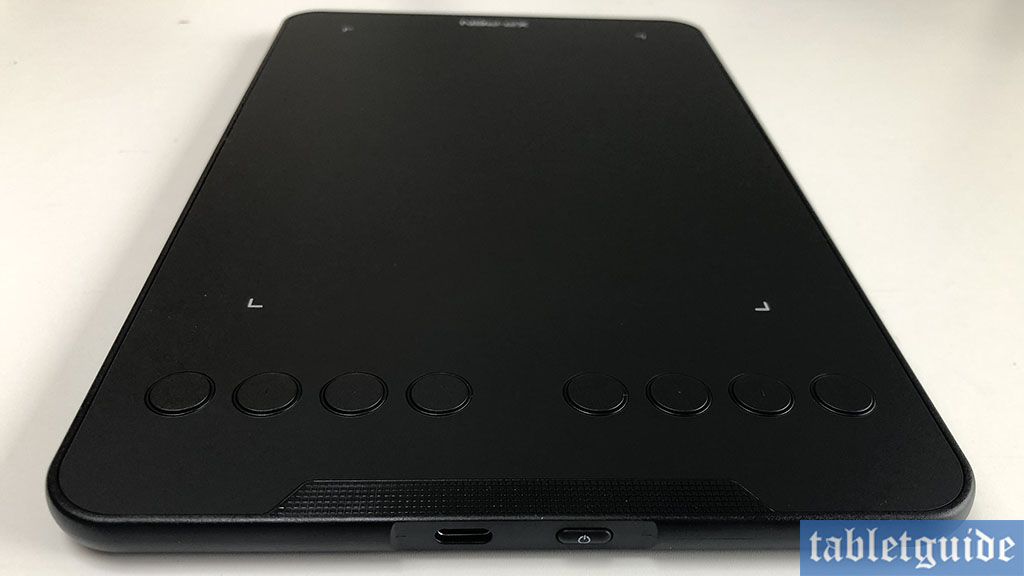 On a full charge, which takes roughly 2 hours, you can expect to get 10 hours work from the tablet (if you need any more than that in one session, perhaps you should think of getting a new job!). Standby time is quoted as being 15 hours. On arrival, the tablet did have some juice, but before you use it wirelessly for the first time, it’s a good idea to use it wired to fully charge it – once less than 10% left, you should see the aforementioned red LED – time to plug it in again!

Not having any wires on the desk makes life easier and it looks kinda cool too – the drawing experience for me was exactly the same with no lagging or connection ‘drops’ – obviously the closer you keep the tablet to the receiver the better, but all-in-all it worked perfectly.

The driver software should look familiar to users of other XP-PEN tablets – it’s here you can change the pen and shortcut key settings as previously described, but also map the tablet to your monitor (handy with a multi-monitor set ups), rotate the viewing angle, adjust the ‘Display Ratio’, ‘Set Workarea’ and export your configurations as a back up etc. There’s also a handy link to the XP-PEN website for updates etc. Should you need to ‘reset’ the settings, simply hit the ‘Default’ button.

One option I was unable to test (being an iPhone owner!) was the ability to use this tablet with an Android device i.e. a tablet or smartphone. There are two USB adapters included for connection and you need to rotate the tablet into ‘portrait’ mode to mirror the Android device you are drawing with.

XP-PEN’s range of tablets is huge and there is a device for all requirements and budgets. If you want a small, reliable, portable (and wireless!) device then this comes thoroughly recommended. I expect this wireless option will become more widespread across the XP-PEN products in the near future… Cables – ugh – how 90s! 😊