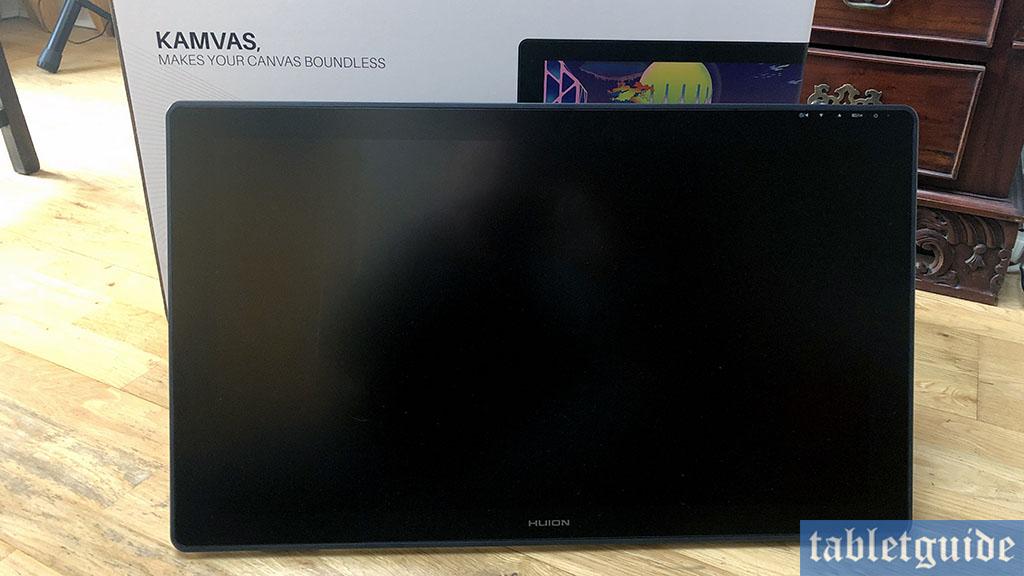 One of the leading manufacturers of graphics tablets, HUION, recently launched not one, but three new 24” pen displays; the Kamvas 24, Kamvas 24 Plus and the Kamvas Pro 24 (4K). It’s the Huion Kamvas 24 Plus, with its 2.5K QHD Resolution screen and PenTech 3.0 stylus technology that gets the MyTabletGuide review treatment today…

The first thing that strikes you is the size – this is one big device! I had to remove the tablet from the outer delivery box on the floor as it would have been quite a difficult task on my desk!

The Kamvas 24 Plus box front has the now familiar Huion branding, with the product photo sitting on the right, with the Huion logo and product description on the left.

The use of ‘whitespace’ is very cool and lends itself to a nice looking and uncluttered design. The back of the box depicts ‘what’s inside’ and continues with this look and feel – a good job!

I’ve been impressed with previous, smaller HUION tablets in the past and was keen to see what they can do with a tablet of this 24” size, especially with a 2K, or QHD, resolution!

Removing the top polystyrene packaging revealed the goodies inside – a brown box containing all the accessories i.e. adjustable stand (ST100A) (you have to fit it yourself with the supplied screws), battery-free pen, pen ‘nib-clip,’ 10 spare nibs, pen holder (or ‘doughnut’ as they are sometimes referred as!), power adaptor and cable, 3-in-1 cable, USB-C to USB-C cable, drawing glove, Quick Start Guide and the always useful Cleaning cloth… and the mighty pen display itself!

Quick tip: to be on the safe side, put something on the table first to protect the screen (like a towel, or small rug etc) before flipping it over to screw on the stand – it does come with a thin screen protector already attached (which you actually remove after adding the stand!), but it’s better to be safe than sorry – you wanna protect your investment! Four small screws are supplied and it takes only a few seconds to get the simple job done.

When attached, the stand will allow you to adjust the displays height between 20° and 80°. The stand has rubber feet to stop any movement on your desk. 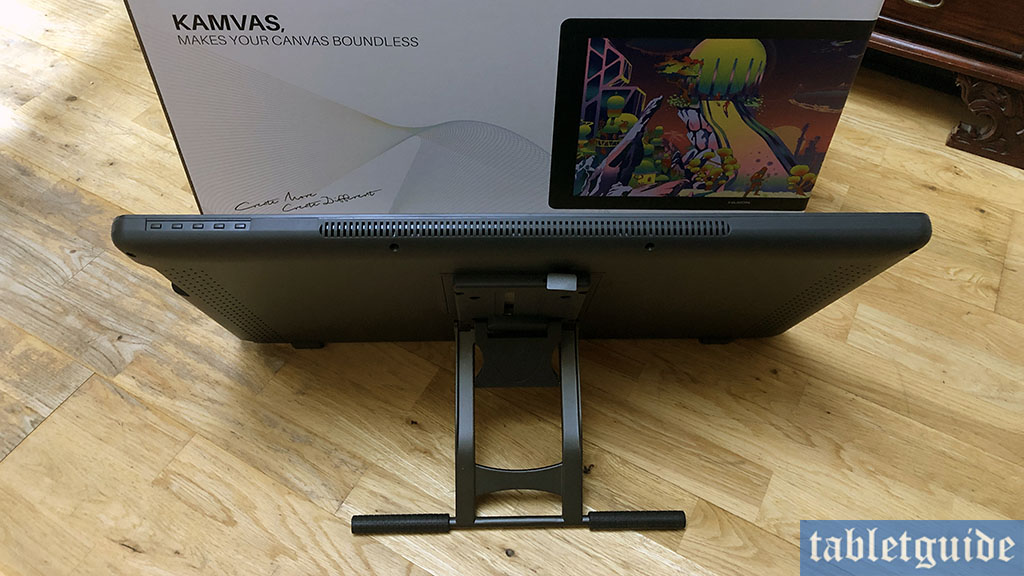 It is fully laminated (meaning no ‘gap’ between the pen nib and what you see/linework on the screen) and has an etched anti-glare glass – perfect for those brightly lit offices or surroundings. It is capable of displaying 16.7 million colours and has a viewing angle of 178°.

On the top right, once plugged in, a small and unobtrusive green LED lights up. To the left of that are 5 small icons representing the button options that run across the top of the monitor.

Using these and accessing the OSD, you can change or update screen settings like the contrast, sharpness, brightness, colour temperature, gamma, vertical and horizontal position etc etc…

I connected the display to my laptop (via the 3-in-1 cable), went to HUION’s website and downloaded the latest drivers.

The driver software should be familiar to those who have other fairly recently released HUION products – it sports the current trendy ‘Dark Mode’ by default, but can actually be changed by going to ‘Settings’ >’General’ and choosing ‘Light’ if you prefer.

The software is nice and simple to have a poke around in – you can map the working area to any display, should you have a multi monitor setup and change the functionality of the pen buttons.

There’s also a simple option to change the pen pressure; drag the lines around in the left box of the ‘Pen Sensitivity Adjustment’ tab and draw/test in the right box until you find a pressure you are comfortable with – easy.

The ‘Store’ tab takes you to (you’ve guessed it!) the HUION website/store – I would have thought linking to the ‘Support’ section of the actual tablet would have been handier or more useful, but hey – they’ve gotta sell those tablets! It’s a simple task to find the support page anyway…

Before first use, it might be a good idea to go to ‘OSD Settings’ and quickly calibrate the monitor – its not required, but while you’re there, you may as well, just to make sure everything is working as it should, pen-wise.

This really is a huge tablet – sitting up close and personal to it makes it ‘feel’ even bigger and is fantastic for working on large images, especially with it’s 2K resolution.

You can create a 1920 X 1080 artboard in Photoshop and still have a lot of screen real estate for all your menus and palletes. Windows icons are pin-sharp and the colours are fab.

Even at this size, I’m not sure I’d like a 4K resolution as everything would, presumably, appear even ‘smaller’ and you would have to ‘scale up’ the image, which would defeat the purpose – the size and resolution works perfectly.

You will of course, need to make sure you have enough desk space – this display doesn’t have any shortcut/express keys, so you will need your trusty keyboard sitting at the side.

Plugged in, calibrated – time to draw!

The pen is nice and light and is the latest HUION PW517 stylus incorporating their latest PenTech 3.0 technology. It has a nice non-slip rubber grip around the button area and is very comfortable in the hand. It’s obviously plastic, but feels quite well made.

It supports 8192 levels of pressure sensitivity and 60° of tilt – this is hardly worth mentioning anymore as this is the new ‘standard’ for nearly every pen from every tablet company now! 😊

The pen pressure worked exactly as you would expect – pressing harder produced thicker lines and vice versa! The end of the lines/strokes tapered off very nicely and the pen slid across the screen with ease. The stylus needs to be only 10mm away from the screen to be registered and/or recognised.

Overall, it felt great drawing on this.

Those of you coming here after watching the accompanying video review may ask “Hey – what about the weird lagging I just saw – the lines were struggling behind the pen?”

Sure enough, there was some lagging, but rest assured – I never encountered this again after that initial set of scribbles! If you watched the full video, the image I drew and painted (I don’t actually draw that fast…almost, but not quite!) afterwards didn’t suffer that fate bizarrely?

It may have been my laptop causing this, so I’ll give HUION the benefit of the doubt – after that it was perfect! To check/confirm this, I connected the pen display to my high-spec PC and I never experienced any lag whatsoever – this really is a smooth drawing experience – great stuff HUION! 😊

If you do encounter any weird ‘goings-on’ with this, or any tablet really, checking or unchecking ‘Windows Ink’ may solve the problem.

I really loved this pen display. Colours look great, the image is pin-sharp and the size is incredible. It really does feel like you’re sitting in front of a high-end, professional device. And it is. And I am. (Professional, that is… and sitting in front of it, I mean…I’m not a device…erm, getting confused now…!).

If you’ve got the desk space and want to ‘upgrade’ from a Full HD 1920 x 1080 drawing experience, then I can fully recommend this – you won’t be sorry!