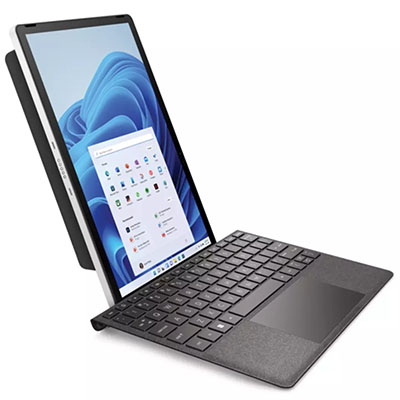 The tech giant HP has announced the arrival of a new 11-inch tablet PC along with Laptop PCs, Desktop PCs, and HDR Monitors.

It will be available for purchase in this December with the starting price of $599. The tablet is also said to be available at Best Buy in December.

HP has been constantly innovating features in its new devices with keeping in mind the change we all have witnessed.

Last 18 months has brought a shift in how we work, play, and relax, so there is a need of digital devices that lets you easily switch between work, play, entertainment, and creative tasks.

HP partnered with Google to launch its new Chromebook tablet recently which also was inspired by our hybrid lifestyle. However, this tablet and other PCs launching along with it will be powered by new Windows 11 and its features.

HP did a press release yesterday about this new products it’s planning to launch. It also mentions the studies and surveys they did. According to it, 73% of respondents want a device that lets them represent creatively and has a powerful features to work out professional tasks.

Well, it makes sense because you wouldn’t want a separate device for video calling your friends, attend work meetings, and binge watching your favorite show or write stories.

HP 11-inch tablet PC is world’s first tablet with rotatable camera. A tablet fills the gap between the convenience of working on a computer and smartphone. So, when a tablet is designed for a hybrid lifestyle, it can eliminate the need for a PC as well.

With a default portrait mode, this new tablet has stunning features and specifications. Its stupefying 13 MP camera can flip itself from front to back in an instant. Its first impression is it’s like a Microsoft Surface Go. But HP 11-inch tablet PC is uniquely different in its own way.

It is the first tablet by HP working on a Windows platform. Moreover, it allows you to use Windows 11 Snap Layouts in portrait and landscape mode for ease and convenience while presenting in a meeting. This becomes much better with the innovative built-in kickstand it comes with.

The new HP 11-inch tablet PC is compatible with an optional magnetically detachable keyboard that works in both modes – landscape and portrait. Other additional features include the support for HP Rechargeable Tilt Pen, Windows Ink, and HP Palette software. It has a USB type C connectivity port.

All in all, all features and specifications of new HP 11-inch tablet is looking quite promising. We can’t wait for it to hit the shelves of stores and review it for you.