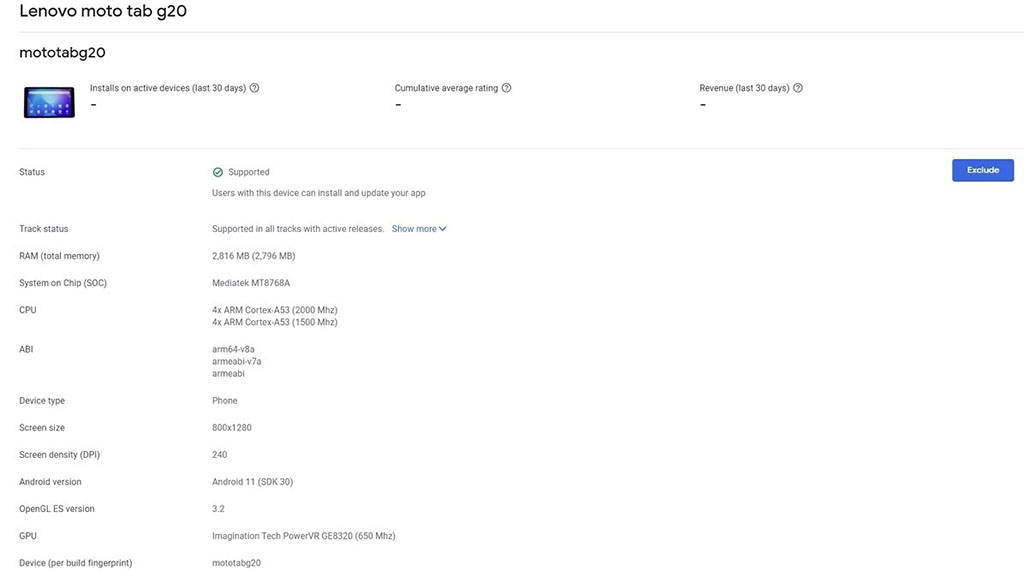 Motorola is likely to introduce a new tablet for its international markets soon. The device has been recently spotted and some of its specifications are already out. From what has been revealed, it seems like the upcoming Motorola tablet will be a budget offering with decent firepower.

A new tablet named Moto Tab G20 has been spotted on Google Play Console. The listing comes complete with an image as well as specifications of the device. Both of these suggest that the Moto Tab G20 will be a rebranded Lenovo Tab M8 (3rd Gen).

As can be seen in the device’s image, the Moto Tab G20 will sport a small 8-inch screen with thick bezels on the side and narrower, but still noticeable bezels on the top and the bottom edge.

The listing, as spotted by MySmartPrice, suggests that this display will come with an HD+ (800 × 1200 pixel) resolution. It will offer a pixel density of 240 PPI. Other metrics like the refresh rate and brightness are yet unknown.

The Moto Tab G20 will be powered by MediaTek’s MT8768A (Helio P22T) chipset and will run Android 11 out of the box. The operating system is expected to be close to stock Android, given Motorola’s history of using light and clutter-free OS.

The new tablet by Motorola will employ PowerVR GE8320 graphics card for graphical performance. It will come with 2GB RAM and 32GB on-board storage. There will also be an option to expand the storage with an external microSD.

The Moto Tab G20 is expected to be backed by a 5100mAh battery. Though it might not sound like much, it will likely keep the device running through a day’s use because of the low-performance demands on it.

Other such assumption that we can make with the Tab G20’s resemblance to Lenovo Tab M8 (3rd Gen), is that the tablet might feature a 5MP camera at the back and a 2MP camera at the front for selfies.

No more information has been shared through the listing of the Motorola tablet as of now. Though what we can judge from the specifications is that Motorola might be going for the budget segment with its launch. A pocket-friendly offering with capable specifications will let Motorola have a serious contender in the tablet market.

However, the company is famous for launching its devices in select regions. So there is a possibility that the Motorola tablet will have a limited release. The US is highly likely to be among those markets.