RCA Voyager 7-inch tablet: First things first. This tablet costs you only and only $50 and is pretty much the most affordable tablet available on the market. This tablet is best built for kids and individuals who want to use this to get basic tasks done like editing or creating a document or even studying for that matter. It is not a very competitive tablet and thus does not lean on providing a lot of features and specifications. But this is undoubtedly perfect for people with minimal approach and usage. Does this come with decent specs that make it ideal for you? Let’s check it out.

As mentioned above, this humble tablet offers you the best of the minimal world. Excellent build quality, decent storage, lightweight, and good display features! All in all, this tablet does the job of a partner who assists you in daily tasks. Nothing more, nothing less!

The RCA Voyager 7-inch Tablet offers you 1GB DDR3 SDRAM which is decent enough to handle your media files and documents without any hassle. Typing on the word was normal. Editing a photo, I clicked using a basic editing app was smooth too. However, if I opt to install games on it, it will start to give me some lags, because of course it is not built for massive games. Even the best of smartphones in the market with great RAM gives you that glitches while gaming heavily. Apart from that, this RAM is adequate and efficient to meet your daily tasks. Talking about the storage, this basic tablet has 16GB of storage memory which is pretty good. You can also expand the onboard memory by putting in additional memory via the microSD card slot. The actual storage might vary a bit because of internal files and pre-installed apps. But this does not cause hindrance, and transferring or storing data is pretty smooth.

On the processing front, it equips a quad-core processor clocked in 1.2GHz which gives the tablet smoothness to handle any multimedia. It does not add up to the speed, but rather maintain the original performance up in pace. Shuffling to and fro different apps surprisingly did not give lags. Surfing the internet was as good as expected. So I can say this is pretty much a good processing promise in such low cost. Also, it runs on Android 6.0 Marshmallow, which is called sweeter than most android version. It has better functionality than previous versions and offers more internal customization than before. This OS is specifically designed to make functionality easy and provides several shortcuts for easy access to apps and files. 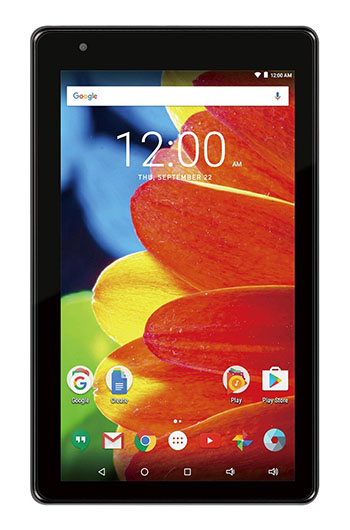 This tablet has a good build quality and weighs just 0.61 lbs, which is very light! With dimensions of 7.3″ x 0.49″ x 4.5″, it has a 1024 x 600 resolution giving you good visual quality and brightness. The 7-inch screen space is decent enough to type and work on your documents. The only part that turns me down is the thick bezels. It covers and takes up a proportion of the screen. But as this tablet is a very low-cost device, I can’t complain about every inch of detail. Moreover, the thick bezels help while holding the tablet while watching a movie or typing data. The display features the Swype Keyboard too which helps in faster typing. You have to slide between letters, and the keyboard algorithm will send the required word. I must say, playing 4K videos was not as magnificent as expected, but it does give you the right colors on the front which kind of balances the whole visual experience of it.

It is powered by one lithium polymer battery which gives you 6 hours of charge which was pretty decent for me! A 100% charge allowed me to watch two movies entirely. At the same time the long lasting charge fluctuated between 4-6 hours when I connected it to the network connection and downloaded some files and watched movies simultaneously. I was not too uptight about the capacity fluctuating, because this tablet isn’t something you use for serious work which needs long hours of prodding. It has a nice slot for charging. Other ports and slots include one microphone jack, one headphone jack, and one microUSB 2.0 port. All these ports including the microSD card slot makes this tablet a versatile one which lets other devices connect, expand memory and work on it.

Camera and other supports

It has a rear webcam resolution of 5MP with digital zoom and auto-focus. This tablet also has a front camera which can be used for clicking selfies. The images captured by the camera gives you a decent quality. But anyways tablets are not used extensively for taking photos. Imagine you holding that big tablet and clicking a photo instead of just shaking your phone up for a high quality picture. Apart from that, it has a built-in 802.11 WiFi and Bluetooth v4.0 which helps you on the connectivity front. The bluetooth of this device is specially efficient in stronger and faster pairing to bluetooth devices. It also has a speaker on the back which is loud enough to be your small stereo system. I wouldn’t say this has a pristine audio quality, but it is not bad at all! It supports all popular media formats and has an Android music player too.

The RCA Voyager 7-inch Tablet is a very inexpensive device which can be availed by anyone for quick and daily use. Mostly, it can also be used as kid’s tablet. Why? Because it does not charge you heavy and can be used as your digital partner for studying and watching videos. Not saying that this a very premium high-end processing hulk, but this gets you through the day without facing lags or glitches. It will cost you just $43 on Amazon. (The other versions of this tablet with dual cameras and more specs are available too!)