Where portability and affordability come hand in hand, an Ematic EGQ373BL 7-inch tablet is born. A tablet is always used as a handy partner to work on the go or get your necessary or urgent work done. Now trust me, when I say this is affordable, I mean every inch of the word. It surprising that the brand could pack such features at such a low cost. I wouldn’t mind saying ‘cheap,’ but then most of the features are impressive that they shadow the word. Like most of the Chinese smartphones and poorly manufactured tablets, I had my doubts on this one. But to my surprise, it had decent performance and capacities that would help you with both your entertainment and work utilities.

Ematic EGQ373BL 7-inch Tablet has the best of walk in the park features. It is portable, that usually comes expensive, but surprises you with its price. It has useful features and looks that an entry-level tablet should have. The features and specs of this tablet say that right from a kid in the house to a working man, anybody can use this for essential daily tasks, fun or not! 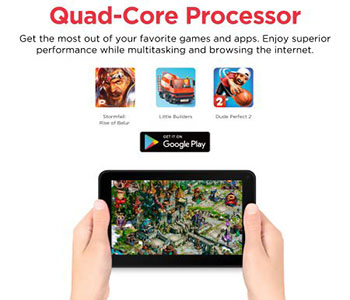 RAM should be taken seriously. But for an entry-level tablet, that offers only basic computing tasks, should it be more in number? Ematic EGQ373BL, 7-inch Tablet, provides 1GB RAM which is by far the standard size for entry-level devices. Even though it seems less, it did not lag on me and gave me good performance with its memory onboard. When I threw heavy files in it, it could not eat it well. However the transfer rates were smooth, but on the whole, the performance of the tablet seemed to slow down a bit. It definitely did not impress me, but again..Entry-level tablet at a low price!

On the other hand, to support RAM, it had some storage that kicked well. As I knew it could not swallow massive files, the 16GB room capacity (expandable up to 32GB via microSD card) served me well with my photos and videos. It cannot store massive game files or 4K videos. Even if it did, it would run slow.

It has good processing power with the 1.2GHz Quad Core processor at its gut. It cannot provide you a herculean processing strength (expecting it from an entry-level tablet is a sin) but will give you enough speed and fluidity to play Candy Crush. We can wait for it to go blazing fast, like the other tablets, but looking at the price, this processing was way more than what I was paying. Trust me. You don’t need a supercomputer. Another factor that makes the usage smooth is the Operating system. It runs on Android 7.1 Nougat which has better battery saving features and key functionality. This android version also has upgraded its interface to better suit the users according to the fast-running clock. It has more shortcut keys to it and an expanded list of settings that help you optimize the device the way you want. 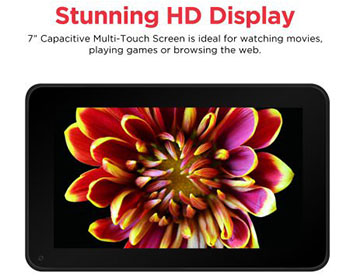 There isn’t much to speak about the design of the tablet. It is basic yet looks good. Even though it looks good, the thick bezels around it make me sad. Those fatty bezels make it seem really old-fashioned. It also covers up the ample screen space which they could have provided otherwise. Talking about the screen space kicked the display-hungry-monster in me. I am always in on some excellent display features. This tab is capacitive with its multi-touch functionality that proves to be useful with the 7-inch display screen. It has 1024 x 600 HD screen resolution that gives nice visual quality. Even though it does not provide me 4k resolution, it leaves me with the satisfaction of watching an entire movie with HD quality. I also tried watching my favorite cartoon (who says I can’t watch them?) and I was impressed with the loud colors too. Also as this tablet only having a bulk of 0.58 lbs, it is ultralight!

Battery and other features 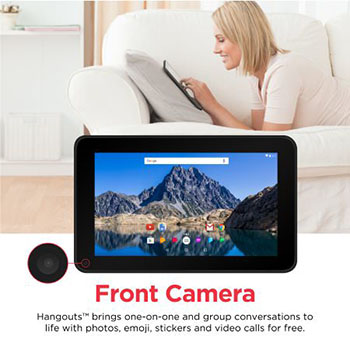 It has a decent battery runtime with slow charging. It does not have large capacities that could run for almost half a day. This kind of battery behavior is natural with these type of tablets which only has a modest task to function. And essential functions and computing tasks do not require large chunks of battery which kills the device soon. The battery life of this tablet is only subject to the kind of usage you have. It just has a front camera, but I don’t judge a tablet by its camera! It is fitted with an accelerometer that judges movement with precision. For connectivity, it has Wi-Fi bandwidth of 802.11 b/g/n. It has a Bluetooth and an HD video player that supports up to 1080p with all popular media supports.

The thing with entry level tablets is that they are very hard to come by in all the features together. Balancing it out is difficult. There might be features that lack in quality and some directly absent! But the other features balance it out. Some entry level tablets are made for all round purpose, and other’s have their own purpose. The Ematic EGQ373BL 7-inch Tablet has mainly been called out as an entertainment tablet that will provide you with the best of content that you put in, in the best way, at your fingertips! This tablet definitely had its pros and cons, but availing it after knowing that it will let me through the day by helping me with my tasks was a right decision. This tablet cost me only $54.98 (Official Ematic Site). This tablet is a worth a buy if you have a kid at home that would love to have a tablet or someone to have their entertainment or study partner.