DASUNG announced via their tweet stating that they released their new Paperlike Pro(Touch) 13.3 E-ink tablet that works with Touch function on indiegogo. These devices built for display, it can function for the best of your health. When we talk about health, we are talking about the eye. Normal devices like laptops, tablets or smartphones have blue light emission and brightness that can potentially damage after long usage. That’s where E-Ink PC monitors come in the picture.

Moreover, especially with the new DASUNG Paperlike Pro Touch, they have stepped up in the game. It is a wide and big screen monitor with Touch function that delivers a smooth and fluid touch response. Traditionally it was always seen as a device for E-rea 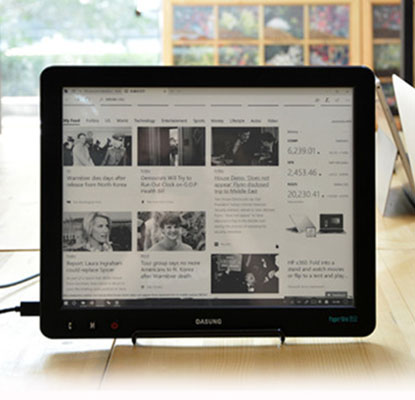 ding. Now manufacturers have extended the craft to use for computers too with better specs of resolution and clarity. This new device from DASUNG comes with a promise of better speed and accuracy while typing, reading or watching a video file.

The name, DASUNG Paperlike Pro Touch 13.3-inch E-ink tablet monitor itself suggests the real monitor or paperlike experience of the visual without compromising on the accuracy while translating it from the first device to this monitor. This new PC monitor also has 1600×1200 resolution that might deliver the precision or clarity of visuals (fonts, letters, pictures) you want. The announcement of the new arrival was tweeted by DASUNG on twitter. The tweet also had a thumbnail of a youtube clip which is supposedly explaining the features and brilliance of this E-Ink Monitor. It is no doubt that DASUNG comes out with better and upgraded devices every time and with new 13.3 E-ink PC Monitor and all the fun features that comes along, it will truly be a device worth to purchase. And as they claim, it is ‘Fun beyond Imagination’.