The developers have made the Raspberry Pi tablet, CutiePi, using a custom-designed Compute Model (CM3) carrier board, which is integrated with features for greater portability of the device. The CutiePi board is open-source hardware that is certified by OSHWA.

The PCB (CutiePi Board) has designs that have provision for input/output devices like USB Type-A, USB Type-C for charging, micro HDMI, and a microSD slot for external storage. The hardware is made compatible to support other gadgets like phones, external keyboard, or a mouse.

The tablet comes with enhanced features to suit the convenience of the users. The user interface of the tablet is just like that of any other device. The device is lightweight, with a net weight of 360g increasing the mobility of the product.

The CutiePi rocks the 8-inch IPS LCD touchscreen with a resolution of 1280*800. The flexibility of the UI makes it possible to open a new terminal and operate it with a screen keyboard. However, if the physical orientation of the tablet is changed, the user interface follows the same direction.

The Raspberry Pi tablet is equipped with features like battery level reading and sleep or wake button. It provides the users the adaptability to load your existing Raspberry Pi projects in this tablet and run it efficiently without any trouble. 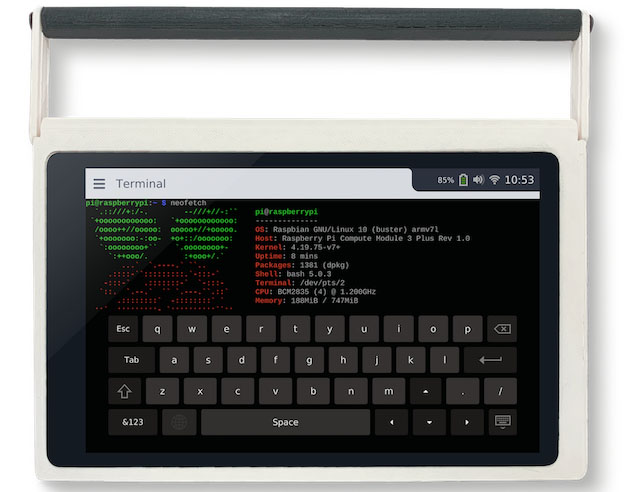 The UI makes it easier to launch new tabs, create new projects, and the flexibility to switch between the tabs to enhance the user’s productivity and multitasking abilities. It supports other features like Bluetooth 4.0 and Wi-Fi connectivity to surf the net for inspiration.

The life of this tablet lasts long with the Li-Po 5000 mAh battery, and it doesn’t need to be connected to a keyboard or a monitor to set up your projects on the Raspberry Pi. The power management features allow the users to use this tablet like any other ordinary gadget.

There’s no need to continually provide CutiePi with power supply, you can just charge it like any other device and start designing your project when the idea strikes you.

The operating system of CutiePi works on a combination of Raspberry Pi OS and CutiePi shell for a fast, interactive, and intuitive user experience. In addition to the other in-built apps, the tablet will support Raspian PIXEL apps via XWayland.

It is now easy to release your Raspberry Pi projects in this very portable CutiePi tablet that lets you make changes in your project on the go. The main motto of the developers is to accentuate the creativity of the users by making the device portable.

The CutiePi is expected to be priced in between $150-$200 range in the United States. However, the Raspberry Pi tablet is now available for a pre-order.