It was in rumors earlier that Samsung is about to launch Samsung Galaxy View 2 SM-T927A as it was seen in the Wi-Fi Alliance website, but on the 25th Jan 2019, this tablet was featured on the Geekbench. This means the tablet will be released soon maybe in two-three months. The previous model Samsung Galaxy View tablet, which hit the market long back in the year 2015 did a tremendous job with a great screen size of 18.4 inches and fascinated a number of users. So what’s exciting in the new Galaxy View 2? 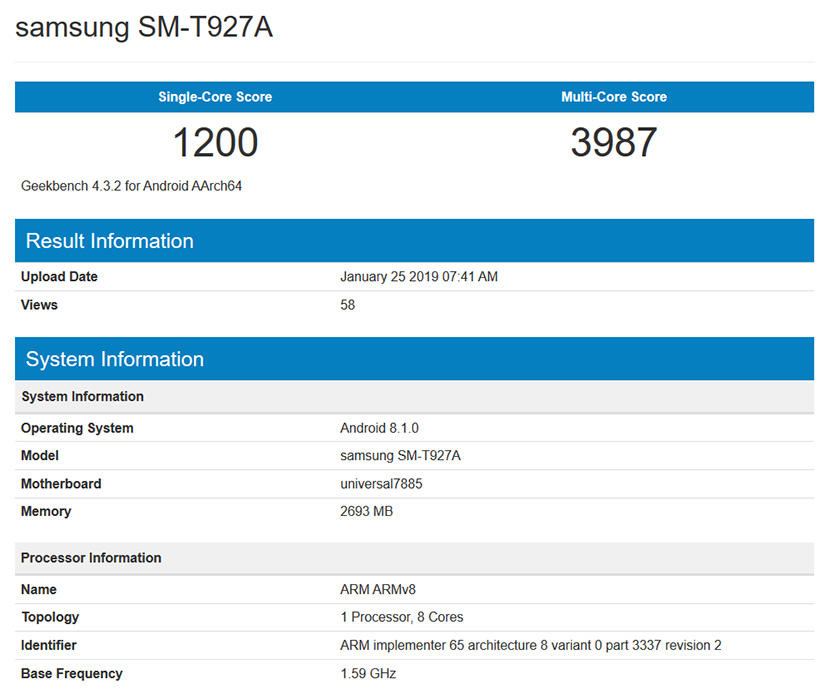 Well, Geekbench released a few specifications of the tablet on its website and the number one specification that you can count on your fingertips is the new tablet will run on Android 8.1.0 Oreo. Furthermore, the tablet Galaxy View 2 has been equipped with a powerful CPU, the superfast Octa-Core Exynos 7885 SoC, providing you the speed of 1.9GHz to enhance your overall performance.

According to Geekbench, the RAM of the tablet will be 3GB, which is quite moderate and the tablet has scored better on the website, 1200 single-core score and 3987 multi-core scores. It is expected that the tablet will be a bit smaller as compared to the previous model, maybe 17.4inches Full HD. Samsung has focused more on the design of the tablet as you’ll find it more sleek, slim and lightweight, providing more ease to the users to carry the tablet all around.

We can also expect that the tablet will be showcased on February 20th grand event at Barcelona along with a couple of more products by Samsung. Hopefully, all these speculations will be on rest in the coming weeks as the event will prove everything itself. So let’s wait for the great event!